The Tennessee School for the Blind (TSB) Athletic Department has a rich history of team and individual athletic achievements.  Find out more about the programs here. 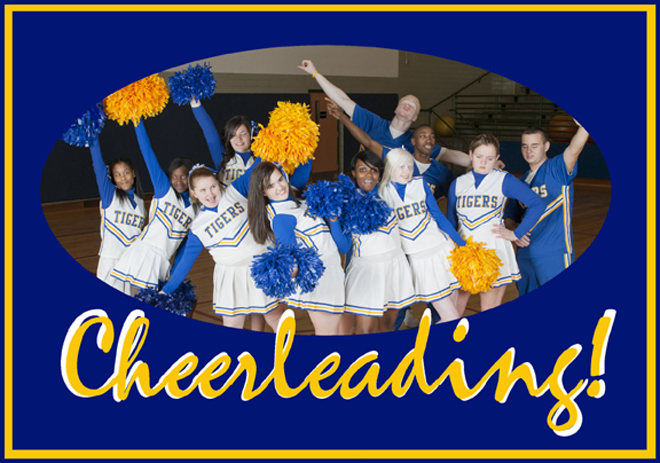 Cheerleading provides students an opportunity to participate in a very unique sport. Whereas many sports require individuals to compete against other individuals, cheerleading is a true team sport. The students involved learn both fitness and cooperation. They often surprise themselves at how outgoing they become. Cheerleaders also have the opportunity to travel to other states to compete and make lasting friendships while doing so.

Tennessee School for the Blind encourages both boys and girls to compete in cheerleading. Our training starts in October and ends in January.  The students train four days a week after school hours. They also attend special training one day a week in order to prepare for our annual competition. The cheerleaders begin supporting the wrestlers at their matches the first week of December. 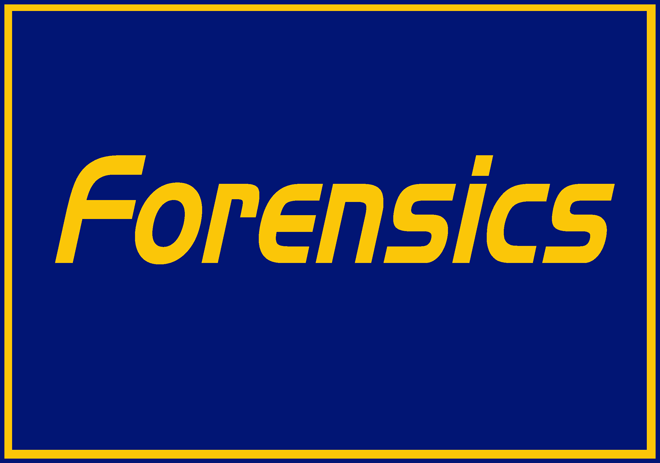 The TSB Forensic League is a group that promotes interest in all phases of public speaking.  It encourages the spirit of fellowship and sportsmanship and fosters the development of competent and fluent leaders for the school and community.  Meetings are held weekly throughout the school year and competitions are held nationally, as well as locally. The TSB Forensic League competes with local schools as well as other special schools.

Junior Forensics is an extracurricular activity that helps students ages 10 years old through Middle School learn to speak in public. It also provides the opportunity to develop positive self-esteem and interact with peers from other schools. Members of the team compete in four to five meets at local public and private schools during the spring semester. 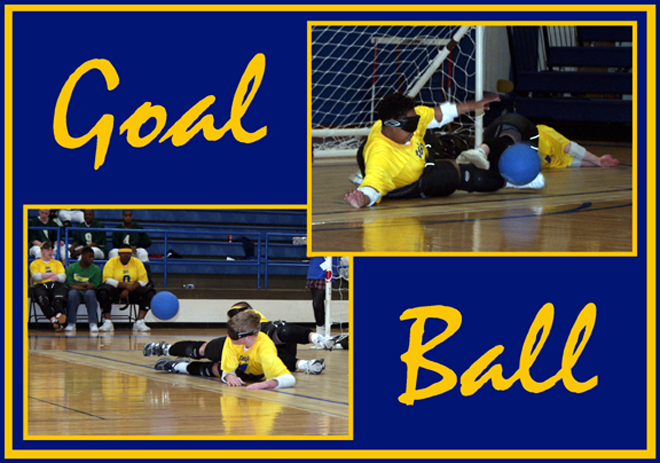 Goalball is a team sport designed for blind athletes. It was devised by an Austrian, Hanz Lorenzen, and a German, Sepp Reindle, in 1946 in an effort to help in the rehabilitation of visually impaired World War II veterans. The International Blind Sports Federation (IBSA - www.ibsa.es responsible for fifteen sports for the blind and partially sighted in total, is the governing body for this sport. The sport evolved into a competitive game over the next few decades and was a demonstration event at the 1976 Summer Paralympics in Toronto. The sport's first championship was held in 1978 and goalball became a full part of the Paralympics from the 1980 Summer Paralympics in Arnhem onwards.
Participants compete in teams of three and try to throw a ball that has bells embedded in it, into the opponents' goal. They must use the sound of the bell to judge the position and movement of the ball. Games consist of two 10 minute halves. Blindfolds allow partially sighted and sighted players to compete on an equal footing with blind players.
Goalball was adopted as a competitive sport by TSB in 2005 by Bill Schenk and volunteer coach C.G. Moore. TSB has competed in dual meets that year against Ohio and Missouri. Competing in the NCASB 2005 tournament, the TSB Tiger Boys Team placed 3rd.  The team members were: Jeremy Neal, Mitchell Strickland, Alex Hubbard, Timmy Graybeal, James Dean, and Dwaine Jones.
The 2007 team competed in Saint Augustine, Florida at the Junior Nationals. The team that year also did several demonstrations at the FedEx Forum, home of the Memphis Grizzlies, in conjunction with the Clovernook Center.
In 2008 the TSB Tiger Boy Goalball Team placed 1st in NCASB conference play. The team that year consisted of: Alex Hubbard, Matt White, Dwaine Jones, Dustin Johnson, Jonathan Johnson, Josh Hodge, Josh Hill, and Robert Pittsley as team manager. Bill Schank was still the head coach.
By 2010, TSB fielded both a girl's and boy's goalball team. The teams that year were coached by Doug Walker and Margaret Tucker and were assisted by C.G.Moore. In the NCASB Conference competition, the Girl's Tiger Team placed 3rd and the Boy's Tiger Team finished 4th. The teams were made up of the following: Girls Tiger Team- Laura Elliott, Kayla Franklin, Emily Green, Laurie Richardson, and Hannah Willis   Boys Tiger Team- Ryann Adams, Chris Cook, Garrett Jones, Derrick Manning, at Rich, and Jeffery Springfield.
In 2012 the TSB Tiger Girls Team brought home 1st place in the Conference Championships for the first time in school history. The girls making up the team were: Taylor Grenier, Elizabeth Harden, Miranda McClain, Laura Richardson, Corgan Waters, and Shelby West.  The TSB Tiger Boys Team finished with the third-place trophy in conference play. Nick Heggie, Alex Kitts, Dereck Manning, Troy Mortimer, Mat Rich, and Michael Ward made up the team. The team was coached by Allison Nanneman and Nicholas Trotter.
During the 2013 season, the tiger teams remained competitive.  The TSB Tiger Girls Team finished 2nd in conference play and the Boy's team finished 3rd. Corgan Waters, Taylor Grenier, Alyssa Loggins, Lori Richardson, Tori Harrison, and Shelby West made up the girl's team. The boy's team consisted of Michael Ward, Derrick Manning, Nick Heggie, Alex Kitts, and Troy Mortimer.  Coaches for the teams were Allison Nammemann and Patrick Hector.
The 2014 season found the TSB Tiger Girls Team finishing 1st in NCASB Conference play. The boy's team again repeated in third place.
The 2015 season made exciting history for the school. For the first time in school history, both the TSB Tiger Girls Team and the TSB Tiger Boys Team returned home from the NCASB Conference with 1st place trophies! The coaches were Alicia Blevins and Patrick Hector. 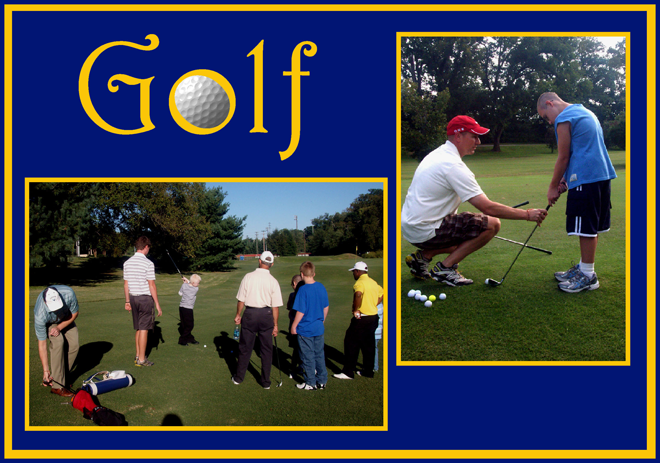 The Blind Golf Movement has struck at The Tennessee School for the Blind.  Several totally blind and low vision students and adults have participated in the activity since it began in 1997. This program provides the opportunity for our students and adults in the Nashville area to explore golfing as a leisure time activity, and possibly more. Every Tuesday students receive training from professional golfers and volunteers from the community. The goals of this program are to demonstrate the importance of teamwork, improve communication skills, enhance appropriate social skills, gain self-esteem and self-confidence and develop new skills for life. Coach Andy Joiner, a former member of the Middle Tennessee State University golf team, is the TSB team sponsor. The team is a member of the United States Blind Golfers Association 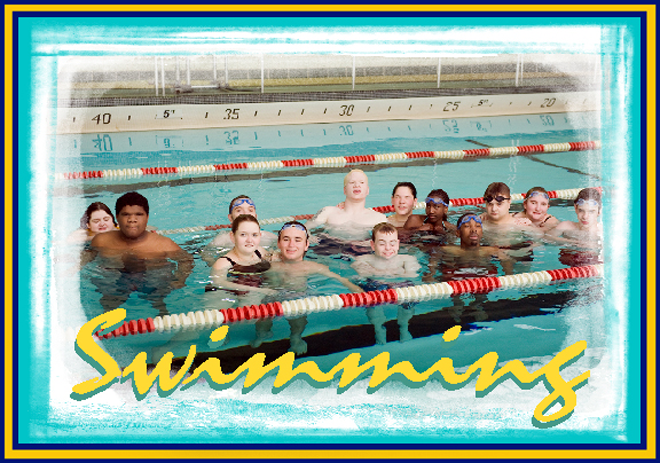 Lack of vision does not have to prevent you or someone you know from enjoying the fun and health benefits of swimming.  People with visual impairments not only swim, but many also compete in swimming events at the local, national, and even international level. Swimming for the blind is part of the Paralympics. All it takes to succeed is the willingness to learn and a few simple adaptations. Learning to swim with a visual impairment may require these adjustments. Instructors get in the water to demonstrate strokes by physically manipulating the swimmer's limbs. Similar instruction on a one-on-one basis is necessary to teach turns and starts. If the swimmer wishes, a tapper is used during meets and practices. A tapper is a simple device consisting of a pole or cane with foam or a tennis ball attached to the end. A helper, also referred to as a tapper, positions themselves at the end of the pool. As a blind swimmer nears the end of the pool, the tapper strikes the swimmer's body lightly as a warning. The tappers we use here at TSB are folding canes with tennis balls affixed to the end. We look forward to your participation and a fun and exciting this season! 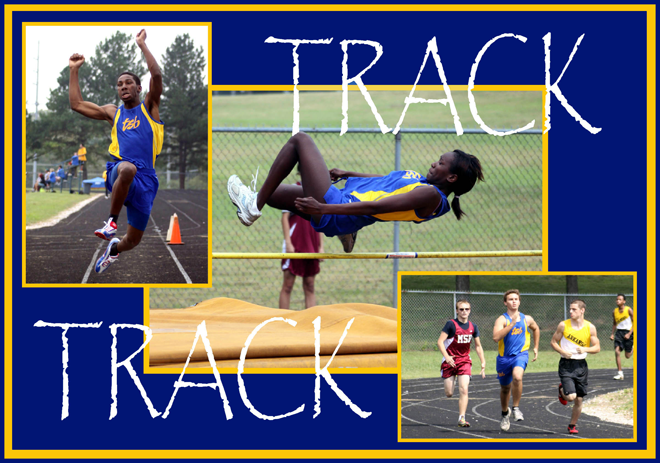 The Tennessee School For The Blind track team is made up of a boys and girls squad.  The team competes in track and field events with other schools in the North Central Association of School for the Blind (NCASB).  Some of the events are sixty-meter dash, sixteen hundred meter run, high jump, triple jump, and numerous other running and field events. The season starts in August and runs through October.  Each squad is divided into three classifications.  The Classifications include:

- Class A is for students with total blindness, who may possess light perception, but are unable to recognize hand shapes at any distance.

- Class B is for students with a visual acuity of 10/200  in better eye after best correction and/or no better than five degrees of visual field.

- Class C is for students with visual acuity better than 10/200 in the better eye after best correction or six degrees or better of visual field.

These classifications ensure that students with different visual functioning compete with students with similar visual abilities. 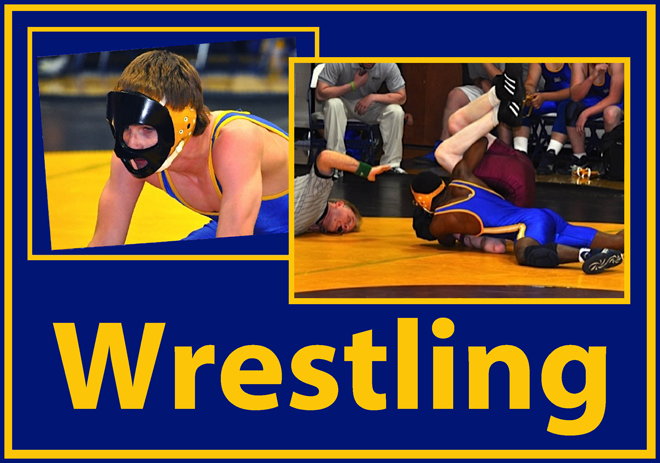 The TSB wrestling program involves interscholastic competition between other public schools in Metro-Davidson County and the surrounding counties as part of the Tennessee Secondary School Athletic Association (TSSAA). We compete with other schools for the blind in the North Central Association of Schools for the Blind Conference (NCASB).  The NCASB is composed of 15 state schools for the blind and sponsors wrestling competitions as part of its interscholastic sports program.

The wrestling season starts with practice in November with competition beginning in December and continues until the second week of February.  Wrestling matches and tournaments are scheduled after the school day on Tuesday, Thursday, and Saturday.  TSB usually travels outside of the state to compete in the NCASB tournaments.  This program provides students with visual impairments the opportunity to compete on an equal basis with other students in athletic competitions.